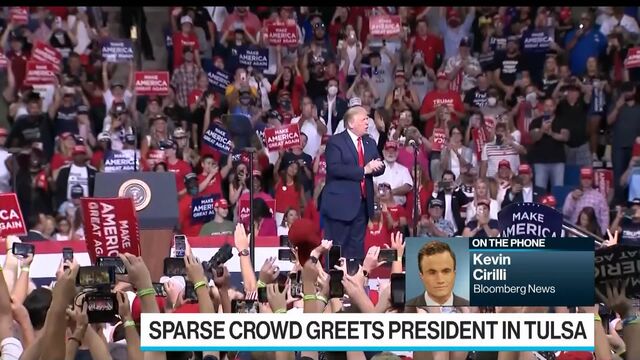 With the nation reeling from the Covid-19 pandemic, a recession that’s thrown 20 million people out of work, and waves of protests against police violence, nearly every recent poll shows President Donald Trump headed to defeat in November. And Trump’s sparsely attended rally in Oklahoma last weekend did little to indicate those polls are missing a hidden groundswell of support.

The RealClearPolitics average of general election polls finds Joe Biden with a commanding lead that’s grown to 9.5 points. A similar polling average from FiveThirtyEight puts Biden ahead by 9.2 points and leading Trump in every battleground state. On June 10, Gallup found that Trump’s approval rating had plummeted 10 points, to 39%.

Even as polls show him tanking, Trump, 74, is staking his re-election hopes on the claim that he’s ably handled the pandemic and that voters secretly prefer his “law and order” approach to countering the protests for racial justice. At his Tulsa rally, Trump declared, “The silent majority is stronger than ever before!”

Yet there’s little evidence that Trump’s handling of either the pandemic or the protests is carrying anything like majority support. A June 18 Quinnipiac University poll showed that voters prefer Biden over Trump to manage the coronavirus response (54%-41%), handle a crisis (54%-43%) and tackle race relations (58%-36%). Summing up the snapshot of public opinion toward the president’s leadership style, Quinnipiac polling analyst Tim Malloy said it amounts to “red flags and red numbers.”

Turning it around before Election Day will be tough. While candidate Trump recovered from a series of campaign crises to prevail in 2016, presidents have historically struggled to improve their poll numbers six months out from an election. A CNN study examining incumbent approval ratings going back to 1944 found an average shift of just 3 points between June and November of an election year.

Does this mean Trump is toast?

Not necessarily. However, winning another term will entail a rebound to rival Harry Truman’s in 1948, when a 20-point increase in net approval rating in the months before the election cinched him the narrowest of victories.

Interviews with Trump campaign veterans, strategists in both parties, and independent economic forecasters produced a general agreement that if the election were held today, Trump would be in big trouble. But they also yielded three plausible scenarios in which Trump could still come back to win another term.

Trump often bounces back from crisis

The first centers on the pattern of Trump’s presidential approval rating, which at several points has dropped below where it stands now, yet always buoyed back up once the crisis of the moment had passed. In August 2017, for instance, after expressing support for a white supremacist rally in Charlottesville, Virginia, and trying to repeal the Affordable Care Act, Trump’s approval rating fell to 35%. But it soon recovered and could do so again.

“We’ve had three major events in three months: the pandemic, the economic fallout, and racial protests unlike anything we’ve seen in decades, and that would impact any president’s numbers,” said John Brabender, a Republican consultant. “Unless there are further events of that magnitude, people are eventually going to settle into the question of ‘Do I want Trump or Biden?’ That’s exactly what the Trump campaign hopes will happen.”

In the past, Brabender said, Trump’s support always bounced back because every month seemed to bring good economic news. “It’s easy to put up with a little chaos if you’re seeing positive results,” he said. “People have to feel like we’re on the right path.”

The economy may recover quickly

That leads to the second scenario that experts said could fuel a Trump comeback: a rip-roaring economic recovery. Recent days have seen some unexpected green shoots: the Bureau of Labor Statistics reported that nonfarm payroll employment jumped by 2.5 million in May, while retail sales rose a record 18% as many states eased lockdowns and shoppers returned to stores and restaurants.

More positive numbers could be on the way. “If you believe Trump is down in the polls because of unhappiness about the economy, then there’s probably good news for him on the immediate horizon because it seems to be rebounding,” said Jim Bianco, founder and president of Bianco Research. “There’s a very good case the recession is already over. That doesn’t mean we’re going to get back to the February peak anytime soon. But as long as we’re moving north, Trump can make the case that the economy is recovering.”

A sharp upturn would also reinforce one of Trump’s few advantages over Biden. Even amid the deepest recession since the Great Depression, surveys consistently show that voters still feel positively about the president’s economic stewardship. The June 18 Quinnipiac University poll found that a majority (52%) approve of Trump’s handling of the economy and believe he’s better suited to the job of running it than Biden (51%-46%).

In Tulsa, Trump leaned into that advantage.

“If we don’t do anything stupid on Nov. 3,” he told the crowd, “you are going to have the greatest economic year we’ve ever had.”

Biden could still blow it

Even so, political experts in both parties say that Trump’s best shot at mounting a comeback has to entail the kind of sustained and effective attacks that withered Hillary Clinton’s popularity four years ago, but that he has not yet been able to carry off against Biden. “The biggest question from here on out,” said Brabender, “is how the Biden variable develops.”

While the vast majority of voters have strong, fixed opinions about Trump — positive and negative — the same is not as true of Biden, 77, despite his lengthy political career. “One of the imperatives for the Biden campaign is to color in Biden before Trump does,” Axelrod said. “That’s an opportunity for Trump, no doubt about it.”

At his Tulsa rally, Trump repeatedly lit into his opponent, calling Biden a “helpless puppet of the radical left” who will allow “rioters, looters and criminal aliens to have more rights than law-abiding citizens.”

But those attacks were overshadowed by Trump’s smaller-than-expected crowd and his digressions into attacks on the news media and proving that he can drink a glass of water with one hand.

Republicans say Trump can still exploit misgivings about Biden’s advanced age and mental acuity, while at the same time sowing disillusion with Biden among younger, more liberal Democratic voters, as he did with Clinton four years ago. To that end, Trump’s campaign has pushed for more debates this fall in hopes that Biden will make embarrassing blunders.

“They shouldn’t be shy about going after Biden and highlighting the mental errors that he’s made over time that collectively tell a story,” Brabender said. “I feel quite confident that Trump has the motivation and wherewithal to effectively do that — and will.”

To make that case, Trump and his campaign will have to break through the ongoing flood of news about the virus, the recession, and the protests, as well as questions about his own health and ability to carry out the duties of his office. So far, that has proved impossible, even for someone with Trump’s unrivaled capacity to shape news coverage. It’s why many insiders, including Republicans, see a second term as increasingly unlikely.

Have a confidential tip for our reporters?
GET IN TOUCH
Before it's here, it's on the Bloomberg Terminal.
LEARN MORE